Temperatures at a Florida-size glacier in Antarctica alarm scientists

Scientists in Antarctica have recorded, for the first time, unusually warm water beneath a glacier the size of Florida that is already melting and contributing to a rise in sea levels. View article in the New York Times.

Scientists in Antarctica have recorded, for the first time, unusually warm water beneath a glacier the size of Florida that is already melting and contributing to a rise in sea levels.

The researchers, working on the Thwaites Glacier, recorded water temperatures at the base of the ice of more than 2 degrees Celsius, or 3.6 degrees Fahrenheit, above the normal freezing point. Critically, the measurements were taken at the glacier’s grounding line, the area where it transitions from resting wholly on bedrock to spreading out on the sea as ice shelves.

It is unclear how fast the glacier is deteriorating: Studies have forecast its total collapse in a century and also in a few decades. The presence of warm water in the grounding line may support estimates at the faster range.

That is significant because the Thwaites, along with the Pine Island Glacier and a number of smaller glaciers, acts as a brake on part of the much larger West Antarctic Ice Sheet. Together, the two bigger glaciers are currently holding back ice that, if melted, would raise the world’s oceans by more than a meter, or about four feet, over centuries, an amount that would put many coastal cities underwater.

“Warm waters in this part of the world, as remote as they may seem, should serve as a warning to all of us about the potential dire changes to the planet brought about by climate change,” said David Holland, a lead researcher on the expedition and director of New York University’s Environmental Fluid Dynamics Laboratory.

Glaciologists have previously raised alarm over the presence of warm water melting the Thwaites from below. This is the first time, though, that warm waters have been measured at the glacier’s grounding line. 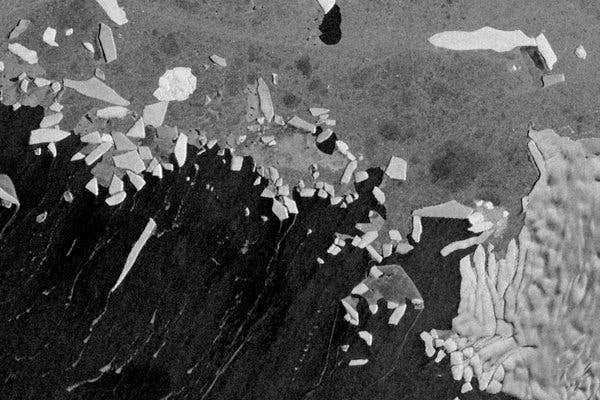 To observe activity beneath the glacier, Dr Holland’s team drilled a hole from the surface to the bottom and then deployed equipment that measures water temperature and ocean turbulence, or the mixing of freshwater from the glacier and salty ocean water. Warm waters beneath the Thwaites are actively melting it, the team found.

Drilling the hole — about 30 centimeters wide and 600 meters deep, or roughly one foot by 1,970 feet — and collecting the data took about 96 hours in subzero weather. The results of the study are expected to be published in March. The expedition was part of the International Thwaites Glacier Collaboration, a series of research projects aimed at understanding the glacier.

“It certainly has a big impact on our US coast and in many areas,” said Twila Moon, a researcher with the National Snow and Ice Data Center at the University of Colorado Boulder, who was not part of the expedition.

While scientists may not yet be able to definitively predict how soon glaciers like the Thwaites will melt, human-caused climate change is a key factor. The biggest predictor of “how much ice we will lose and how quickly we will lose it,” Dr Moon said, “is human action.”

A version of this article appears in print on Jan. 30, 2020, Section A, Page 5 of the New York edition with the headline: Temperatures at Glacier In Antarctica Raise Alarm. Order Reprints | Today’s Paper | Subscribe